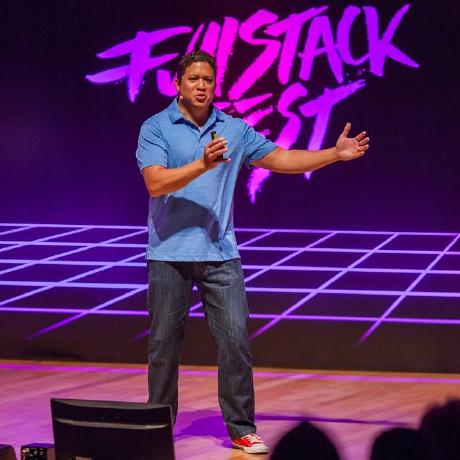 The JSON format has become ubiquitous as a data exchange format as well as a storage format, with many traditional relational databases now supporting JSON as a native format as well as a several document-oriented databases like CouchDB and MongoDB gaining in popularity. JSON as a data format eliminates the rigidity of relational database schemas, allow applications to evolve more naturally.

But did you know that Redis is a full-fledge document database supporting JSON natively? The RedisJSON module adds JSON as a native Redis datatype ReJSON-RL and it is seamlessly integrated with Redis' Search Engine RediSearch. In this tutorial we'll build a simple Document application using Redis OM Spring.

What You Will build#

You will build an application that stores Company POJOs (Plain Old Java Objects) as JSON documents in Redis.

We'll start by creating a base SpringBoot application using the Spring Initializr. You can use this pre-initialized project and click Generate to download a ZIP file. This project is configured to fit the examples in this tutorial. 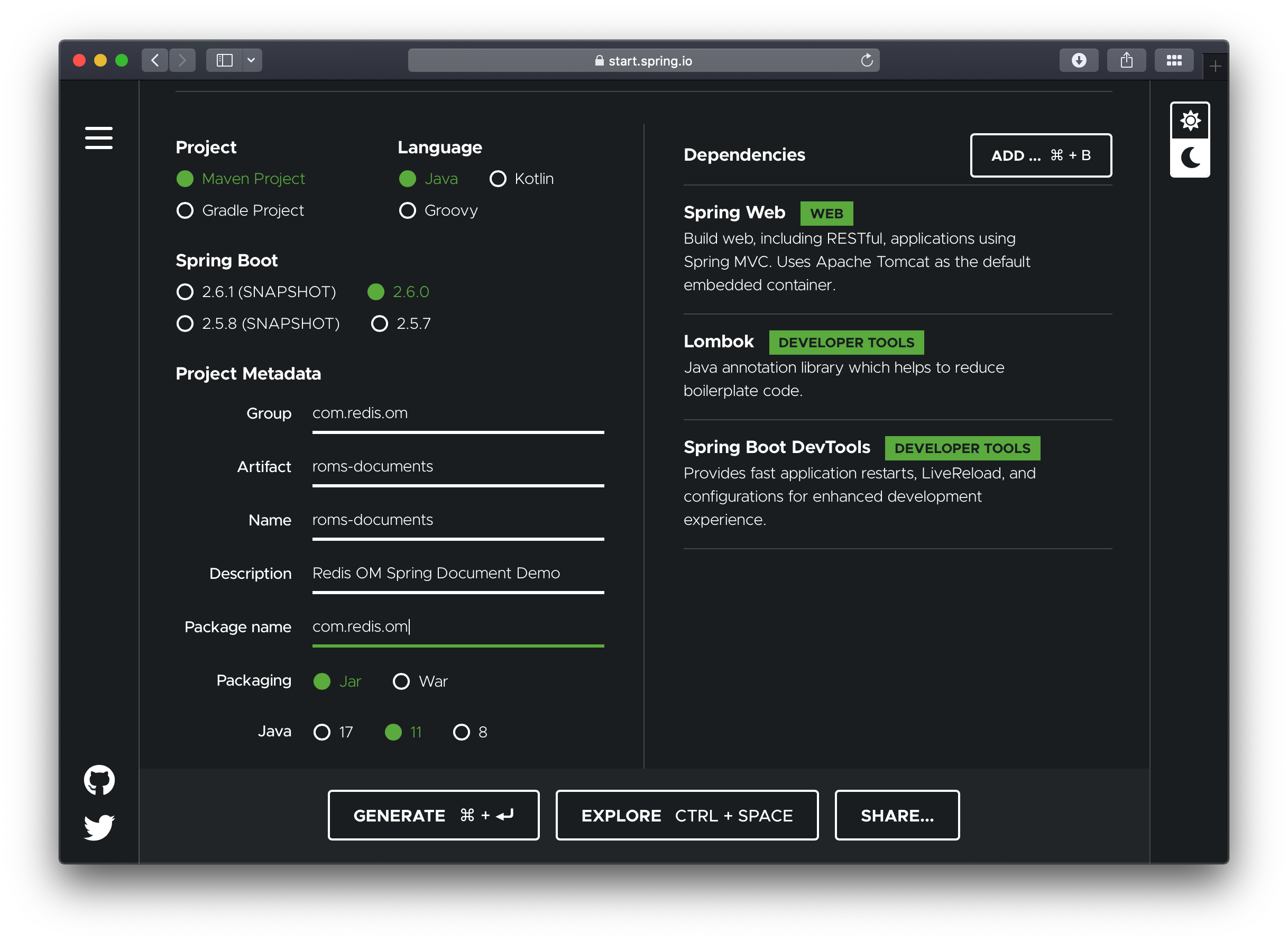 To configure the project:

The dependencies included are:

NOTE: If your IDE has the Spring Initializr integration, you can complete this process from your IDE.

NOTE: You can also fork the project from Github and open it in your IDE or other editor.

If using gradle add the dependency as follows:

Redis OM Spring relies on the power of the RediSearch and RedisJSON modules. The docker compose YAML file below can get started quickly. You can place at the root folder of your project and name it docker-compose.yml:

To launch the docker compose application, on the command line (or via Docker Desktop), clone this repository and run (from the root folder):

Let's also launch an instance of the Redis CLI so that we can spy on what ROMS is doing. To do so we'll launch Redis in monitor mode:

We'll have a single class in our application, the Company class. We'll use lombok to avoid having to create getters and setters. We'll use the lombok annotations @Data, @RequiredArgsConstructor and @AllArgsConstructor.

Finally, to mark the class as a JSON document, we use the @Document annotation.

Note that it has a @Document annotation on its type and a property named id that is annotated with org.springframework.data.annotation.Id. Those two items are responsible for creating the actual key used to persist the JSON document in Redis.

Our company POJO consists of a name and url String properties, a Set of Strings representing a set of tags, a org.springframework.data.geo.Point representing a Geo location for our company's headquarters, two Integers for the numberOfEmployees and the yearFounded and a boolean as to whether the company is publiclyListed.

To create the component responsible for storage and retrieval, we need to define a repository interface. The RedisDocumentRepository extends the familiar PagingAndSortingRepository from the core org.springframework.data.repository package.

Let's create a basic repository under src/main/java/com/redis/om/documents/repositories with the contents shown:

The empty repository declaration is all we need to get basic CRUD functionality/pagination and sorting for our POJOs.

Let's add a couple of Company POJOs to Redis so that we can have some data to play with and at the same time get to undertstand how ROMS serializes POJOs to JSON.

Modify the RomsDocumentsApplication class to include the newly created CompanyRepository using the @Autowired annotation. Then we'll use a CommandLineRunner @Bean annotated method to create two Company POJOs and save them to the database.

In the CommandLineRunner we take the following steps:

Since we are using Spring Boot DevTools, if you already had the application running, it should have restarted/reloaded. If not, use the mvn command to launch the application:

If every goes as expected, you should see the familiar Spring Boot banner fly by:

If you were watching the Redis CLI monitor you should have seen a barrage of output fly by. Let's break it down and inspect it using another Redis CLI so as to understand the inner workings of the system.

At the top you should have seen the FT.CREATE command which using the annotations in our POJO determined a RediSearch index recipe. Since our POJO is annotated with @Document we get a RediSearch index ON JSON against any keys starting with com.redis.om.documents.domain.Company: (which is the default key prefix for Spring Data Redis and also for ROMS):

ROMS uses the POJO fields annotated with @Indexed or @Searchable to build the index schema. In the case of the Company POJO we have name propery annotated as "searchable" which means we get full-text search capabilities over that field. This is reflected in the schema field definition $.name AS name TEXT.

On the other hand the field tags is annotated as "indexable" which means we get an index field of type TAG, meaning that we can search for Companies by the exact value of the field. This is again, reflected in the schema field definition: $.tags[*] AS tags TAG

Spring Data Redis creates a SET to maintain primary keys for our entities, ROMS inherits this functionality from SDR. The DEL command following the index creation is triggered because of the call to companyRepo.deleteAll(); in our data loading method. If we had any saved objects already we would also see calls to delete those individual instances.

Finally, for each of the Company POJOs we should see a sequence of REDIS commands like:

The first line checks whether the object already exists in the Redis SET of primary keys using the SISMEMBER command. Then, the RedisJSON JSON.SET commands is used to save the JSON serialization of the entity. Once that operation succeeds, the id property of the object is addded to the primary keys set using the SADD command.

We have 3 matches, one for each of the Company POJOs created plus the Redis SET for the primary keys. Let's inspect some of the values.

Let's check what type of data structure is stored in the com.redis.om.documents.domain.Company key:

Knowing that it is a Redis SET, let inspect it's contents using the SMEMBERS command:

The set contains all the Ids of our Companies. Now, let's investigate the com.redis.om.documents.domain.Company:01FNRW9V98CYQMV2YAB7M4KFGQ key:

The Redis datatype stored is a ReJSON-RL (a Redis JSON document). Let's check its contents using the JSON.GET command:

With our new gained understanding of how ROMS serialized our Company POJOs, let's move on to expanding the powers of our CompanyRepository to go beyond CRUD.

ROMS most compelling feature is the ability to create repository implementations automatically, at runtime, from a repository interface.

Let's start with a simple method declaration in CompanyRepository that will find a unique instance of Company given the company name.

ROMS uses the method name, parameters and return type to determine the correct query to generate and how to package and return a result.

findOneByName return an Optional of Company this tells ROMS to return a null payload if the entity is not found. The findOne part also reinforces that even if there are multiple results we are only interested in getting one. ROMS parses the method name to detemined the number of expected parameters, the ByName portion of the method tell us we expect 1 single parameter named name.

Let's create a REST controller to test the findOneByName method. Create the CompanyController under the package com.redis.om.documents.controllers as shown:

In our controller, we include our CompanyRepository and create simple method to respond to a GET request at /api/companies/name/{name} where {name} would be the string parameter we are passing as the name to find.

Notice that you can use redis (all lowercase) or rEdI and you will get a match for Redis, if you go below 4 characters, say you try red or RED you will get no hits. RediSearch limits the minimun string match size to 4 characters to prevent potentially millions of results being returned.

Let's add a test endpoint to our controller for our Geo query:

In our controller method we take 2 request parameters; latitude lat, longitude lon and a distance d (in miles). We use these values to contruct the Point and Distance needed for the repository findByLocationNear method.

Formatting the JSON result we get a JSON array containing one entry: Redis.

There might be occassions where you just need to reach for the raw querying power of RediSearch (just like when you need raw SQL over JPA). For these scenario, we provide the @Query (com.redis.om.spring.annotations.Query) and the @Aggregation (com.redis.om.spring.annotations.Aggregation) annotations. These annotations expose the raw querying API provided by the JRediSearch library. ROMS adds parameter parsing and results mapping so you can use raw RediSearch queries and aggregations in your repositories.

Let's test it with CURL:

Formatting the JSON we can see that the results include companies with the tag reliable:

Inspecting the Redis CLI Monitor we see the RediSearch query that produced the results:

Just like other Spring Data based libraries, ROMS can handle a variety of queries using logic and numerical operators like between, startingWith, greaterThan, lessThanOrEquals and many more.

Below are some more examples of what's possible:

This was but a brief tour of the capabilities of Redis OM Spring (ROMS). In the next installment we'll cover how ROMS extends Spring Data Redis Redis Hash mapping to make it even better.